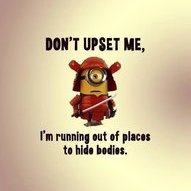 Said no one ever.

It's been raining and sub 60's for most of the time. Maybe a traffic or smog cliche'?